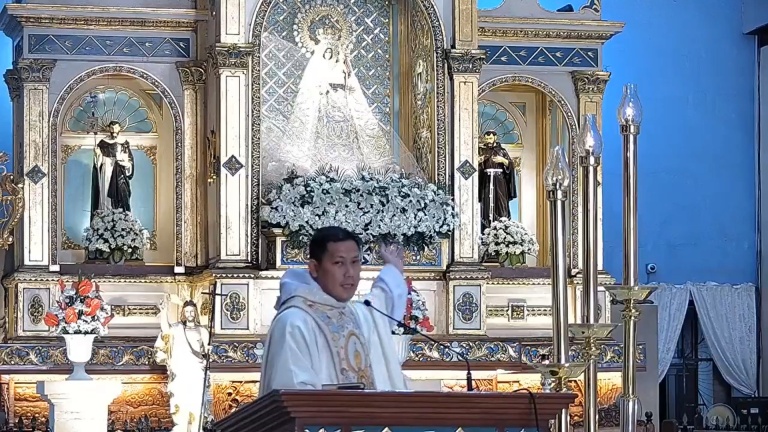 Minor Basilica of Our Lady of Manaoag,
Manaoag, Pangasinan
21 April 2020

Jesus introducing Mary as mother to John is also entrusting us all to her motherly care and protection of Our Lady.

My mother, when I was still young, met a horrible incident. While going home one night, she was attacked by crooks and was badly hurt in the ordeal that she pretended to be already dead after being stabbed by an ice-pick. when the culprits left, she immediately fled from the area and called for help, luckily there were good people who immediately responded to her rescue. When she was already in the hospital for treatment, she recalled in her ordeal and one thing I can remember from her saying that during the whole incident, all she was thinking of was us, her children. She said that during that night, she was praying the whole time to God to take care of us if ever she won’t make it alive. Thank God she survived the attack and is still thinking of the welfare of her children until now.

What my mother did during that night is I think a common trait to many mothers or parents. They would always be thinking of what is good for their children and especially in the most difficult of times. When the going gets tough, you can count on one tough mama will be there to defend you.

I think they could even be tougher than a virus. Whenever a child is at risk, they won’t mind the inconveniences being faced all for the good of their children. Sometimes, mothers even face wars just to protect their children, I remember this report last February about women, mostly mothers and grandmothers who roamed the streets in Manila to protect their children from being the victim of the killings in the country, that is why we cannot say that women especially mothers are weak or an only for the kitchen, rather they are very strong and tough especially with taking care of their children.

If this is true to mothers, can we also say the same to Mary, who is mother to us all? Can we picture her as someone who is tough and can go through difficult times with us and for us? Can she battle with us? It might be difficult to picture Mary wearing a full battle gear or an Armor like a knight, it might be whimsical if we see Mary like wonder woman who goes and fight villains. We are used to depict her as a woman who is sweet, meek, gentle, caring, queenly, pious, anything but not as someone who is tough like a warrior. But isn’t she though? Isn’t our mother, our lady, a warrior too?

One of the titles that we give our Blessed Mother is the title “Queen of Angels” she being the Queen of Angels is telling us that she leads these heavenly beings. Now these heavenly beings are not the usual ‘bambino’ or ‘bambini’ that we usually see in art depictions, they are rather tougher beings and not babies, for they are actually soldiers who goes to battle against evil, thus the celestial battles that we read in the book of the Apocalypse. Now if Mary is Queen to these celestial soldiers, then she is not far from being a warrior. She fights with the angels in battling the evil one.

No wonder in times of battle, there were many instances that her presence was felt by her children because she was there. We remember the Battle of Lepanto, where it is recognised that Mary was the one who shielded those who defended the faith from defeat. In Fatima in Portugal, they recognised that it was Mary who protected them from wars. In Manila, the Lady of La Naval favoured those who carry her Rosary in stopping an invasion by an armada, even here in Manaoag, we have our story of Our Lady who protected these very Church from being bombed by invading soldiers during the World War II. Mama Mary as Motherly as she is, is not afraid to go to battle for her children. She will never turn her back, run away and hide during the most difficult times of her children. She will be there fighting with us and fighting for us.

Now in response to the noble act of Our Mother, Our Lady, may I suggest that we do these two things; One, let us ran towards her. Two, let us run forward with her. When we ran towards her, we ran like a child who is afraid seeking the protection, the comfort that only a mother can give. We go to her with full of trust that she will make things better for us and when we say we trust her, it does not mean that we go our way and risk ourselves and others being contaminated with a disease, this is not trusting her, this is trusting our selfish selves.

We go forward with her to battle against the difficulties during this time of pandemic, we fight not of course with bombs, knives, not with these earthly weapons rather we fight with her with bended knees and arms outstretched to God, praying that he may end this pandemic. We also fight with her through showing compassion to people around us by not thinking of ourselves in these time, most especially the devotees of Our Lady are called to show her example to people, especially to those who are vulnerable that they should not be afraid because we, her children are doing our best to protect them from the disease however difficult it is. This is what our Mother doing for all of us thus being her children we imitate her example.

One of our Dominican brothers share to us that the pandemic that we are facing now has almost the same effect of previous wars to the lives of people, the difference lies on how we face this battle; During the wars we face it with armies, guns, ammunitions, tanks, bombs and with full battle gear. Now, we face this battle in our pyjamas, in our home clothing, cell phones in our hands, monitors in front of us, just staying at home. There might be a big difference when it comes to comfort in this battle but nevertheless this is still a battle that needs to be won and so hopefully as we go through this battle, we equip ourselves with the right weapons, not only with the gadgets but most especially with the Rosary in our hands to remind ourselves that we are not alone in this because Our Mother is here for us, for you and me.